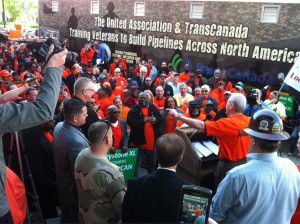 Laborers President Terry O’Sullivan addresses Keystone XL supporters at a rally in front of the AFL-CIO Headquarters in Washington, D.C. on April 24, 2013.

Trade unions that hope to capitalize on the construction jobs that would be created if the Keystone XL pipeline is approved turned up the pressure on President Obama today with a rally blocks from the White House in downtown Washington.

The gathering drew about 300 people—some in orange T-shirts and hard hats—to the pavement outside the AFL-CIO headquarters in Washington to urge swift approval of the pipeline, which would carry fuel from the Canadian oil sands to refineries on the Gulf of Mexico.

Labor leaders reminded the crowd that they had helped put Obama in the White House and helped keep him there, and said he owed them a win on Keystone XL.

“About a year ago, the president came up with a slogan we agree with, and that’s ‘We can’t wait,’” said Sean McGarvey, president of the Building and Construction Trades Department of the AFL-CIO.

He pointed to a poll released earlier this week by the Woodrow Wilson International Center for Scholars that found that 74 percent of Americans to some degree support the project.

The rally helps illustrate the dilemma facing Obama, who must choose between disappointing environmentalists or labor unions with his ultimate decision later this year on Keystone XL.

O’Sullivan said his union would not look kindly on a White House decision against Keystone XL, but he reserved his sharpest criticism for other trade unions including the Service Employees International Union and the Communications Workers of America, which have joined with environmental groups in opposing the project.

“The union movement I grew up in, we do one of two things,” he said. “When it’s good for another brother or sister from a fellow union, we either support them or keep our damn mouth shut.”

“Unions that have no equity in the work are getting in the way and taking food off the table of the proud men and women in the building trades, and to me, that’s unacceptable,” he said, eliciting chants of “bullshit” from his audience.

The rally’s organizers said 3,000 union members and supporters are in town this week to meet with lawmakers and members of the administration to press them on Keystone XL. The action comes after the State Department closed its public comment period on the pipeline Monday, which drew well over a million comments (E&E Daily, April 23). U.S. EPA also sent a letter to State raising several questions about assumptions the other agency used when determining in its draft supplemental environmental impact statement that the pipeline would have little effect on the environment, including climate change.

Pipeline supporters on and off Capitol Hill have blasted EPA for its interference in the process (E&E Daily, April 24).

Sen. Lisa Murkowski (R-Alaska) said after a Senate Appropriations Committee hearing today on EPA’s budget that she had planned to ask acting Administrator Bob Perciasepe whether EPA’s action was an attempt to further delay approval of the pipeline.

“What I was going to ask the acting secretary is whether … they truly are seeking additional information, or whether this is another continuation of the delay that we’ve seen for months now,” she said.