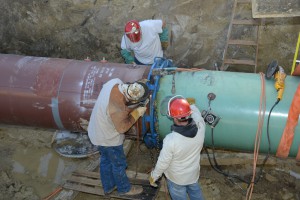 The Oil and Natural Gas Industry Labor-Management Committee (ONGIL-MC) welcomes the release of the State Department’s Draft Supplemental Environmental Impact Statement (DSEIS) on the Keystone XL Pipeline. The DSEIS, released on March 1, 2013, reaffirms the significant economic impact approval of the pipeline will bring to American workers and communities, as well as the safety measures agreed to by the pipeline’s builder, TransCanada, that will ensure the pipeline maintains a minimal environmental footprint. The report is a crucial step in the ultimate construction of the pipeline.

“The State Department’s impact statement is another in the long line of environmental and economic reviews of the Keystone XL Pipeline that have noted the strong jobs benefits and minimal environmental effects of building the pipeline,” ONGIL-MC Chairman and AFL-CIO Building and Construction Trades Department President Sean McGarvey said. “I hope this document serves as a reminder to the President that the pipeline will be built by the world’s best-trained workers and remains the safest and most efficient option for oil transportation.”

The draft statement acknowledges that the construction of Keystone XL is “unlikely to significantly affect the rates of extraction in the oilsands or in US refining activities,” and notes that “there would be no significant impacts to most resources along the proposed [Keystone XL pipeline] route.”

The release of the draft statement signals the beginning of a 45-day comment period, after which the State Department will prepare a final environmental impact statement and then lead an inter-agency national interest inquiry.

“Workers in America’s heartland continue to eagerly await the President’s decision to approve the pipeline, and every day he delays is another day these workers are left unemployed and struggling to provide for their families,” McGarvey said. “In supporting the best interest for our workers and our economy, I continue to urge the President to approve the Keystone XL Pipeline.”